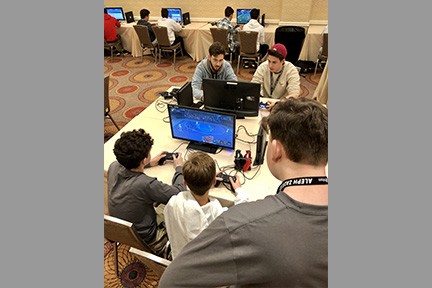 Esports – it’s the fastest-growing segment of sports and gaming that you haven’t seen on television. A $1 billion industry, gamers across the world stream and perform for hundreds of millions of viewers each year.

Now, that arena-energy gaming is being brought to teen in intimate, Jewish settings through Lost Tribe Esports.

The company engages teens by partnering with other Jewish organizations, like JCCs, BBYO, Maccabi Games, and Hillel. The program launched in 2019, and saw increased activity in March and April 2020 following the coronavirus shutdown.

Lost Tribe not only organizes and produces the tournaments, but provides chat rooms through Discord for teens to communicate and build friendship in between sessions. They are also committed to helping organizations incorporate Esports –highly popular with the teen demographic – to engage teens within those organization’s networks.

“Approximately 90% of teens in America play Esports on some level,” Brian says. “We’re just really seeing the opportunity to grow how our communal organizations interact with teens through this space – we’re finding ways to give local organizations tools to keep teens connected.”

With in-person interaction still limited by the public health crisis, Brian says that Esports can help teens keep in touch with their friends. “We are socially distanced – but this is really normal social interaction for teens participate in our programming.”

Esports were added as a category of Maccabi competition earlier this year, and Lost Tribe was instrumental in writing the rules for the tournaments (Note: JCC Maccabi 2020 was cancelled due to the current public health crisis).

“If you’re a parent or adult, you can also tune in and be part of the Jewish experience, too” Brian says, noting that participation is targeted toward high schoolers.

BBYO Liberty Region is working to partner with Lost Tribe to bring programming to their members, including those part of the local AZA/BBG chapter here in Harrisburg, and many members already attend tournaments independently. "Our teens have enjoyed the programming during quarantine," says Jared Rosenbloom, Senior Regional Director of BBYO Libery Region. "It allows them to connect with their BBYO international friends from around the world."

For more information on Lost Tribe Esports, visit www.losttribeesports.org. Upcoming events and tournaments can be found at Facebook.com/LostTribeEsports.