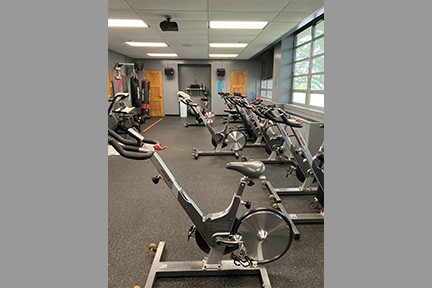 A few weeks back, I eagerly climbed onto a somewhat dusty spinning bike in the Jewish Community Center spinning studio.

“Wonder how I’ll do after fourteen months with no spinning classes?” I mused, thinking I felt somewhat dusty and rusty, too. “It sure feels good to be back.”

Moments later, spinning instructor Jon Cohen started the peppy music, mounted his bike, and began the sixty-minute spinning class that featured varying levels of speed, resistance, and pedaling on stationary bikes. Our little group of masked and socially-distanced participants pedaled away as though we had never left.

COVID-19 abruptly changed almost every aspect of our daily lives. Offices, schools, and synagogues closed. Adults worked virtually from home, while children studied in the next room.

The pandemic shuttered the Jewish Community Center fitness center and spinning studio, too. Few people lamented this as much as I, a self-described “spinaholic.” Eventually, virtual spinning classes were held but they weren’t the same as in-person spinning. For months, I regularly e-mailed Terri Travers, sports and fitness director, asking when in-person spinning classes would return. They finally did a few weeks ago.

Walking into the spinning studio, picking out “my” bike and setting it up felt like coming home even though the bike looked unused but welcoming. I adjusted it to my liking, hopped on, strapped my feet into the pedals and began to pedal along with a few others.

When the music began, Cohen led us through a steady and much-needed warm-up which got our blood pumping. At first, it felt a bit awkward. Within minutes, we were doing high-intensity exercise that combines peppy music and cardio training with endurance.

Soon, everyone was breathing a bit heavier as we sweated and increased speed. We worked the little knobs in front of our bikes to increase and decrease pedal resistance. The bikes kept us informed on our resistance, cadence, time elapsed, how many miles we completed, calories burned, and more.

The pandemic seemed a world away as we felt present in our bodies again, each working alone, yet all together, as we followed the instructor’s commands.

As we pedaled, we worked everything from our cores to our calves. We burned calories, toned our muscles, and enjoyed a flood of endorphins. As always, spinning proved to be a great form of therapy, a workout of the body and mind.

I needed that. In my busy life as a hospice nurse, Community Review reporter, volunteer firefighter, and fire company president and international medical missionary nurse, sometimes my head is spinning! Being on a spinning bike always quieted my thoughts nicely, relieved stress, and even calmed various emotions. It still does.