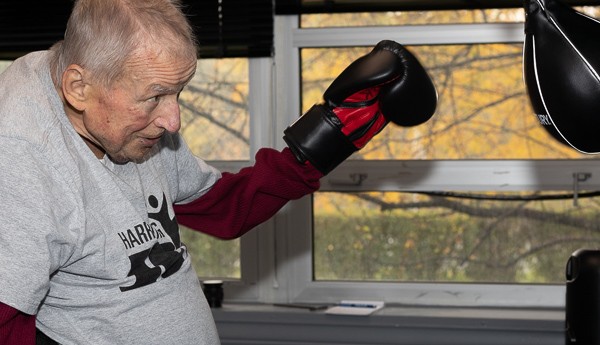 He doesn’t throw quite the punch that Rocky does. He doesn’t yell “Yo, Adrian” either. Yet Cliff personifies the never-give-up attitude of the movie champion portrayed by Sylvester Stallone.

“Rock Steady Boxing has slowed the progression of my Parkinson’s disease,” Cliff, a retired ear, nose, and throat doctor, said during a recent boxing session at the Harrisburg Jewish Community Center. “The camaraderie is wonderful, too.”

Cliff is one of seven participants in the JCC Rock Steady Boxing program which improves the lives of people with Parkinson’s disease, a neurodegenerative disease that causes those affected to have tremors and problems moving.

Founded more than a decade ago by an Indiana attorney with Parkinson’s, Rock Steady Boxing offers participants the chance to work on their endurance, strength, balance, and confidence – the same functions that decline with Parkinson’s.

Terri Travers, JCC fitness and sports director and boxing facilitator, leads them in the twice-weekly, ninety-minute fitness training. She starts the class by having participants do warm-up activities such as stretches, squats, and walking or wheeling around the Mary Sachs Auditorium.

The program is modified for those in wheelchairs, such as Mel Krieger, or those using a walker, such as Cliff Steinig.

After more than a half-hour of warmups, Terri leads the group in exercise games such as throwing a toy called “hot potato” to each other to the tune of “Pop Goes the Weasel.”

By then, the muscles are moving. It’s time to head to the spinning room which heavy boxing bags share with spinning bicycles. The boxers wrap special tape around their hands then don boxing gloves.

“I never thought I would box,” said Marge Rickert, diagnosed with Parkinson’s a year ago. “But it’s a good workout and gives me a great adrenalin rush. I guess I like hitting things!” Mary Callaghan echoed her friend, saying she really enjoys the sessions.

Soon, the participants were hard at work. Cliff and Mel teamed up to jab punches at one bag as other boxers hit other big bags and one punched away at “Bob,” a boxing manikin.

Within minutes, people who months ago felt weakened by Parkinson’s were boxing with the spirit (if not the strength) of Rocky or Sugar Ray Robinson.

“I hit the bag like I’m trying to kill it,” said Mel, demonstrating that attitude with a well-placed punch to the bag. Cliff noted that he never boxed before but has come to like it. As the session continued, the participants worked at improving posture, balancing, twisting, hand-eye coordinating, and throwing punches.

Rock Steady Boxing doesn’t cure Parkinson’s, but it seems to give participants flexibility and fun. Each participant, Terri emphasizes, is a winner in his or her own right.

Rocky Balboa said that “every champion was once a contender who refused to give up.” He could have been talking about the Rock Steady Boxing group.