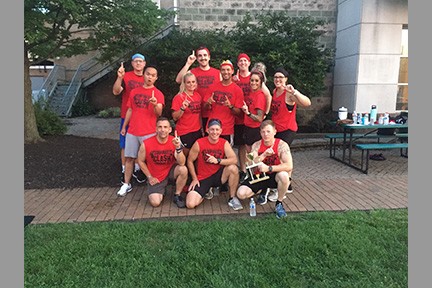 A chance to laugh with coworkers and bond over friendly competition is the mission of the Harrisburg JCC’s annual Corporate Clash.  After a year hiatus due to Covid, the “Business Olympics” were back in action at the JCC on Thursday, August 26th.  Four teams were willing to take on the challenge of twenty events that took place on the JCC field and parking lot over the course of the evening.

Team size varies with each team fielding between ten to twelve participants.  Amy Zeigler, the team captain for The M.S. Hershey Foundation Team and multi-year participant of the Corporate Clash recruited her coworkers and had a solid team of ten members.  “Our staff really looks forward to the Corporate Clash every year,” Zeigler stated.

The night kicked off with an old-fashioned sack race and multiple relays, including a water relay that left one member of each team drenched.  Events included a water balloon toss, corn hole, distance run, and obstacle course, plus much more.

The Susquehanna Police team took home the Championship Trophy and bragging rights for the year.  The Harrisburg Fire Department, who had won the previous two years, finished in second place.  Third place was claimed by the team for The M.S. Hershey Foundation and fourth place went to a great team from CMU.  “It’s a fun event and the guys really enjoy it,” commented Firefighter and Corporate Clash Committee Chairperson Brendon Booz.

“We’ll be back next year gunning to reclaim the title.”

Competition can create an “us against the world” mentality and be great for team building. If you are interested in having your team participate in the 2022 Games, contact Sports and Fitness Director Terri Travers at t.travers@jewishfedhbg.org or 717-236-9555 x 3110.