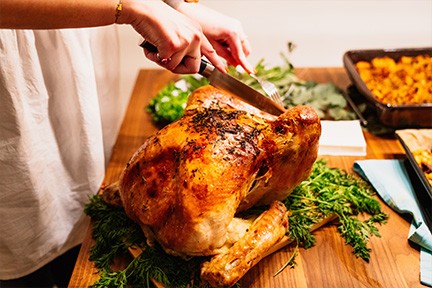 Many Jews, like Americans of other faiths, trace their ancestry to immigrants who arrived in America hoping for a better life.

So celebrating Thanksgiving with a special meal is perfectly normal, even if that meal consists of such dishes as kosher turkey ritually slaughtered and inspected according to kosher laws, stuffing that includes challah, sweet potato kugel, roasted Brussel sprouts with gribenes, and a glass of kosher wine.

Judy Schulder and her husband visit his parents in Honesdale where her mother-in-law serves a fairly traditional dinner with a gefilte fish appetizer.

“She boils it in water with sugar, carrots, and onions and cooks it for one hour and fifteen minutes,” Judy said. “We eat it with a horseradish sauce that has mayonnaise and red beets in it.”

After dinner, Judy’s mother-in-law serves a birthday cake with “Happy Birthday, Everyone” written on it because she celebrates all the birthdays in the family at this meal, the one holiday meal she hosts for the whole family. The next day, she makes another turkey dinner and also serves pumpkin pie.

Tamara Reid and her husband also spend Thanksgiving at his parents.

“I make the stuffing,” Reid said, adding that she is the fourth generation of her family to use the family recipe that came from Hungary.

“In our family, we traditionally freeze leftover challah all year,” she said. “I dry the bread crumbs, soak them in water, squeeze it out and add farina, onion, garlic, poultry seasoning, and eggs. I bake it in the bird – and it is so dense it could double as a doorstop! I just love it.” She also bakes challah for Thanksgiving.

Sally Jo Bronner says she plans a quiet Thanksgiving at home this year, due to COVID-19. She said she plans to teach her daughter how to cook.

Dr. Richard Blutstein said that he and his wife have a kosher Thanksgiving. He said that if they’re going to a home that doesn’t keep kosher, they go to a kosher restaurant, get a Thanksgiving dinner to-go, and take it with them.

“Last year, we spent Thanksgiving with my daughter and son-in-law, who keep kosher, he said. “A kosher Thanksgiving dinner at an ordinary Jewish home is fairly traditional. Almost everything in a traditional dinner can be made kosher unless you want marshmallows for on top of sweet potato casserole. Marshmallows are not kosher.”

Blutstein said that having pumpkin pie for dessert is a little trickier because people who follows kosher laws and eat meat usually wait a time period ranging from eighty-two minutes to six hours until having dairy – which most pumpkin pie contains. He said that some families eat their pumpkin pie first, then remove the dairy plates, forks, and crumbs from the table, before setting up for a turkey dinner.

A Jewish Thanksgiving dinner doesn’t end with dessert either. Many families then move to the living room to discuss nearly everything, watch football, and give thanks for each other and Israel.