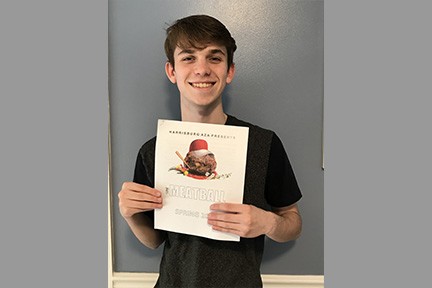 Six years after teenager Adiv Lift lost his life in a deadly car crash, a local Jewish youth group newspaper, named after something he loved, is thriving.

The Meatball, the quarterly publication of the Harrisburg chapter of Aleph Zadik Aleph, keeps the 37 members of the Harrisburg AZA informed about happenings in the local Jewish teenage male group, said Eli Spotts, editor of the newspaper.

AZA is an international youth-led fraternal organization of teen-age Jewish males and is part of the B’Nai B’rith Youth Organization. Aleph Zadik Aleph stands for fraternal love, benevolence, and harmony.

The Meatball is named in honor of Adiv, who was 17 when he died on March 28, 2014 in a fiery car crash near the Cumberland-Perry County line. The East Pennsboro Township teen taught Hebrew School, lead BBYO conventions, attended Young Judaea summer camps, and was deeply involved in the Jewish community.

Adiv, an accomplished singer, soccer player, musician, and mentor, once told a story to friend David Rosen at AZA about how fun it would be to be in a bathtub full of spaghetti sauce with meatballs falling out of the sky- from his favorite movie- Cloudy With a Chance of Meatballs. A year after his death, when the Harrisburg AZA publication, formerly called The Cauldron, was being revived, the group decided to name it The Meatball in honor of Adiv. The group also adopted a meatball as its mascot.

“We publish The Meatball four times each year, once each season,” said Spotts, a Camp Hill High School senior. “It’s 10 - 11 pages each time.”

The newspaper includes AZA news such as a column from the chapter President and other leaders, recaps of recent events and conventions, pop culture and sports, and more.

Spotts said that the Harrisburg AZA chapter members, ranging from 14 to 18 years old, come from the East and West Shores and represent the five Harrisburg-area synagogues.

“The Harrisburg AZA chapter has been around for years but wasn’t always super active,” he said. The seven cardinal principals of the AZA are patriotism, Judaism, filial love, charity, conduct, purity, and fraternity.

“We started the Harrisburg chapter up again five years ago,” Spotts said. “We meet monthly at the Jewish Community Center although we haven’t met since the coronavirus. Now, we are trying to do virtual events.”

Normally, the group has movie nights, holds a car wash each May (although not this year) to raise money to go to conventions with other chapters, competes in sports, and each fall visits the Cherry Crest Corn Maze in Ronks.

The Harrisburg group has adopted navy and lime green as its color, “I Am Harrisburg” as its song, the meatball as its mascot, YarmulkeMamba as its superhero, Lord Garquaad as its villain, curry as its favorite ice cream, and Brothers Pizza as its restaurant.

“I’ve been in the group for five years,” said Spotts. “It’s great for kids like me who don’t have Jewish kids in their school. It has helped me make friends and connect with the Jewish part of my life.”

Spotts, who plans to study business at the University of Pittsburgh after graduating from high school, said that The Meatball is distributed at chapter meetings. It also can be seen at harrisburgaza.weebley.com/the-meatball.html.