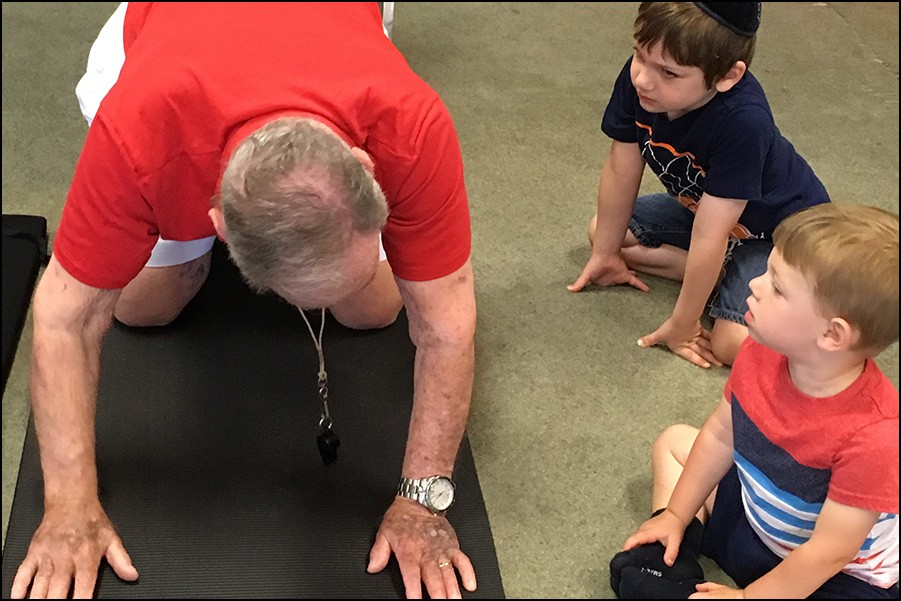 When Chuck Kline started teaching gymnastics to young members of the Harrisburg Jewish community in the late 1950s, Dwight D. Eisenhower was president and David L. Lawrence was Pennsylvania governor.

“I enjoy working with kids,” said Chuck, as he knelt on a gym mat during Sunday morning “Tumble Time” at the Jewish Community Center. “It’s not the Olympics here. It’s just a fun way to teach the kids exercise and dexterity.”

The energetic toddlers gathered around Chuck as the informal class began, appearing fascinated as he taught them how to somersault.

“Make your body like a ball, with your chin tucked in touching your chest and your hand and leg positions correct,” he said. “Then, just do it.”

The toddlers, some as young as 2, listened attentively to Chuck, a sprightly 92. One by one, they tried somersaults. Tumbling, a form of gymnastics without props or equipment, also involves learning handstands, flips, and other such moves.

Chuck showed endless patience as he taught each child the correct portion of their hands, legs and heads “so you don’t hurt your neck.” He pointed to his head, noting that “a lot of gymnastics is up here. If you think you can do it, you can.”

One little boy’s yarmulke kept falling off, prompting Chuck to tell him it was OK to take it off while somersaulting.

Another little boy, 2-year-old Eden, giggled as he fearlessly tried to somersault but somehow kept rolling over to the side. “Keep trying,” Chuck urged him. “Remember, Chuck Kline said you can do it.”

Hadassah Feinberg’s three children – Ella, 5, Ariel, 3 and Eliana, 2 – all seemed to enjoy themselves, with Ella especially skillful at somersaults

“She’s a natural at this,” Kline said as the little girl did several somersaults. “Good girl, you got it.”

Her mother smiled, saying that tumbling gives her children “a chance to exhaust their energy and interact with other kids.”

Other parents agreed. Rishona Campbell, whose three sons include a 2-year-old and 1-year-old twins, called tumbling a good outlet for their energy too.

Mayer Kohn said he started the tumbling classes because “I’m an exhausted parent who needed a way to entertain my daughter.” Monica, who will turn 2 in September, may be a bit too young to do somersaults, but her father said she loves playing with the other children.

“Our second daughter, Shoshana, was born in late April so it will be a long time until she can come here,” he said. “I enjoy watching Monica run around with the kids. I also like talking to other parents.”

“No,” he said. “We started this class and Chuck Kline saw a flyer and reached out to me. He didn’t want to teach serious gymnastics but said he could teach basic tumbling. He even taught me how to somersault!”

Mayer, at 6-foot-1, towered over the toddlers as he took his place at the mat, tucked his head in, got his hands and legs in position, and did a somersault.

“It was fun, just phenomenal,” he said. “The kids had a blast watching and figured if I could do it, they could do it.

Mayer said that classes range from three to 25 children. “We’re not a formal class,” he said. “Nobody has to RSVP. Just show up and have fun. It’s open to all JCC members.”

For Chuck, teaching tumbling is a throwback to his earlier years when he was The Silver Academy (then Yeshiva Academy) gymnastics coach in the late 1950s and early 1960s. His students then included such well-known members of the community as Norman Gras and Ricci Doctrow.

“I liked teaching gymnastics then,” Kline said, “and I enjoy teaching these tumbling classes too.”

Tumble Time is an informal playgroup for kids of all ages. The group meets most Sundays from 10am -12pm in various rooms of the Harrisburg JCC. To check class schedule and for more information, contact Mayer Kohn at amayerkohn@gmail.com.

STAY  TUNED for a story featuring Chuck Kline’s nearly seven decades of blowing the shofar in an upcoming edition of the Community Review.