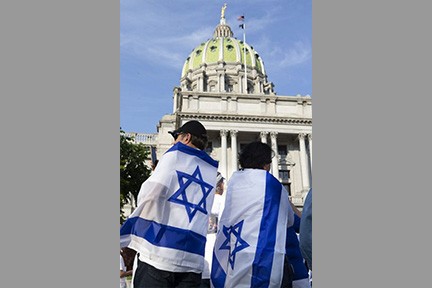 Hours after a ceasefire was announced between Israel and Hamas, community members gathered for a pre-planned rally at the PA State Capitol on May 20.

The Israel Rally For Peace brought more than 150 attendees from across the community together in support of Israel. The program was sponsored by the Jewish Community Relations Council of the Jewish Federation of Greater Harrisburg.

“Gathered today are people with different political backgrounds and perspectives,” said Rabbi Ron Muroff of Chisuk Emuna Congregation. “We are not here to talk politics – we are united in supporting the right of the people of Israel to live without constant fear of balloon, rocket, and missile attacks.”

“Imagine yourself going about your day, and you hear that sound,” she said.

Maly recalled living in Haifa and experiencing rocket attacks as a teenager. On one occasion, her neighborhood movie theatre was destroyed.

“Israel has been tested for many years by terror organizations,” she said. “We want to live in peace – and I’m wishing peace upon all of us.”

The rally followed eleven days of death and destruction in the Middle East, the most intense period of fighting in the conflict since 2014. More than 4,000 rockets had been sent by Hamas toward Israel, with Israel responding with airstrikes.

Most of the attendees wore blue and white in honor of Israel, and many waved flags or displayed banners. The program was livestreamed and is available on the Federation’s Facebook page. More info on how the program came together is outlined in Marty Brill’s article on Page 3.

State Representative Greg Rothman (R-PA87) recalled his experiences visiting Israel in 2011 and 2014. He says that on his second visit, he heard sirens warning of incoming rockets and spent hours sheltering in a hotel stairwell. He later downloaded the Red Alert app, which can save lives in Israel by notifying citizens before rockets strike.

“My phone has been going off all day,” he said, noting the thousands of rockets that had fallen. “For those of us here in Central Pennsylvania, it’s a reminder of what the people of Israel are going through right now.”

Reverend Russell Sullivan of Pine Street Presbyterian Church spoke passionately against anti-Semitism, saying “I want my church to be an effective peacemaker and bridge builder in the Middle East – I condemn any extremism that divides and breaks down opportunities for peace.” 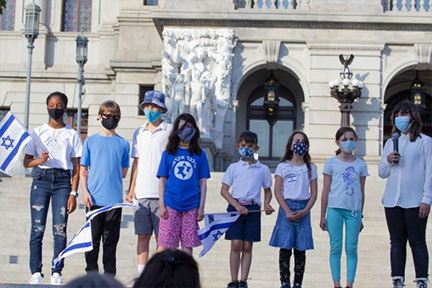 Students from The Silver Academy opened the program with the Star-Spangled Banner and closed with the Israeli National Anthem, Hatikvah.

“The hope is one of peace,” he said. “I hope that we continue to raise our voices on behalf of Israel and take these messages with us, and let the world know that we will not stand idly by.”