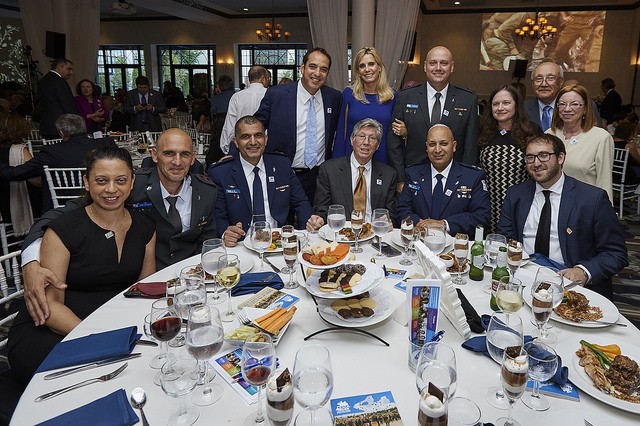 For the 2nd consecutive year, Harrisburg will send a delegation of attendees to the Annual Gala of the Philadelphia/Southern New Jersey Region of Friends of the Israel Defense Forces.

Friends of the IDF is a nonprofit organization which supports former and current soldiers through financial relief, programs for wounded veterans and bereaved families, scholarships, educational and cultural programs, and more.  It was founded in 1981 with the motto “Their job is to look after Israel. Ours is to look after them.”

Last year’s delegation included more than 50 community members, who joined a crowd of over 1000 supporters at the Gala. Complimentary roundtrip bus transportation will again be provided this year for interested attendees, courtesy of Michael Shefet, Mordechai Reuveni, Nitzan Zecharya, and Burt Morris.

The Gala aims to uplift IDF morale and send a message of strength and solidary to the IDF and the State of Israel. “We are looking forward to this year’s event and attending with community members who love Israel and support the service and sacrifice of the members of the IDF,” said Burt Morris, a member of this year’s Gala Committee.

Burt stressed the importance of being a “friend” and supporter of the IDF. “When I learned about the organization and the support they provide for those who protect Israel, it grabbed my heart,” he said. “As a Jew and a grandfather of four Sabras, I’m very conscious of the importance of the IDF in their lives and in the lives of all Israelis.”

Last year’s program included a surprise reunion between an IDF soldier and his family, as well as a shofar blowing trio. “We hope that many will decide to be a part of this wonderful and inspirational event,” Burt continued. “If you are thinking of attending, you should. You will walk away thinking, ‘I now understand why this is so important.’”

A Night of Heroes, the FIDF’s 9th Annual Gala, will be held on Wednesday, September 18th at 5pm at Vie, 600 N. Broad Street, Philadelphia. For more information on tickets and sponsorships, visit fidf.org/events/Pennsylvania-southern-nj-fidf-9th-annual-gala. To travel with other supporters from Harrisburg and reserve your space on the complimentary, roundtrip bus, contact Burt Morris at 717-215-4261 or Michael Shefet at 717-991-7506.