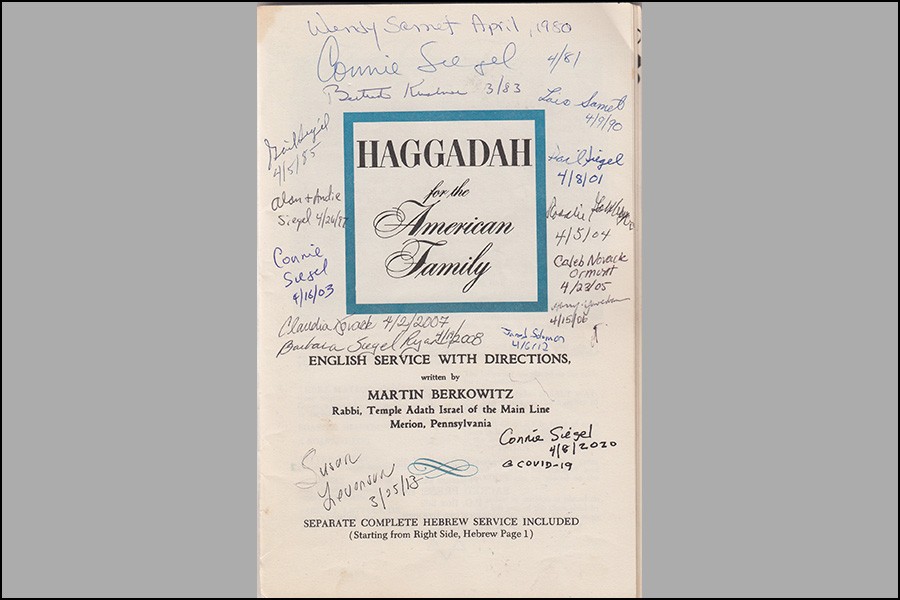 Why did just the two of us choose sitting at our dining room table in our apartment in Redondo Beach California? We could have chosen electronic Zoom seders including dozens or 50+ participants from our family or synagogue or chavurah.

We wanted something different. Let us go back to 80 years of seders. Gail grew up in Cedar Rapids Iowa. Seders were held at the home of her paternal grandfather. The nine Rapoport children attended the Orthodox service conducted by Grandpa Rapoport with little participation of their spouses or children. The 35 attendees loved the food Grandma made and the event lasted a long time.

Connie's family in Toronto was smaller so often friends were invited. Connie's maternal grandfather, Abe Sherman started 6 months in advance making red wine in a barrel from red   grapes. His wife, Booboo Annie made sweet raisin wine. Again the major participation of the children was the 4 questions and finding the afikoman for a prize. The kids often left during the event to listen on radio to hockey games.

When we were married and lived in Harrisburg, Pennsylvania we found a grocery chain, Food Fair, where we shopped. At Passover they gave customers as many copies as you wanted of  a Haggadah written by Rabbi Martin Berkowitz of a Main Line Philadelphia synagogue. We called it the Food Fair version because it was donated by a national food manufacturer, Standard Brands, who sold many grocery items. There was a

very small notification of its products which included Planters Oil, Tender Leaf Tea, and Chase and Sanborn Coffee. The name was Haggadah of the American Family. The all-Hebrew version started from the right and the English-Hebrew version started at the left. They met at the songs in the middle - including Dayenu, Chad Gadyo, Echod Mee Yodaya and Adeer Hoo.

Getting 10 or 15 free Haggadah's was a real savings in the cost of the seder and we used the same books year after year, especially when Food Fair went out of business years later.

Many users associated the name Maxwell House Coffee with the Food Fair Haggadah.

Central Pennsylvania was an unusual place because many Jewish-owned grocery companies started there. Food Fair was started in Harrisburg by the Sam Friedland family. Its stores expanded down the east coast to Florida where the family owned a large Miami Beach hotel, the Diplomat.

My actuarial and investment management firm, CONRAD SIEGEL, started in 1963, has many interesting relationships with clients that were in or connected with the grocery business.

One CONRAD  SIEGEL  client  was  Merchant's  and Businessmen's  Mutual  Insurance  Company  of  Harrisburg. M&B was famous for paying a 20% dividend on all its fire insurance policies every year. The long-term CEO of that company took his annual vacation by driving south to Florida and checking every Food Fair store on the way. He looked for a lightning rod on its roof. No lightning rod, no insurance. By directing the lightning strike into the grounded rod, the savings would be significant.

Another firm that started in Sunbury PA, just north of Harrisburg, was Weis Markets. Their early Harrisburg stores were in Market Square and Third & Emerald Streets. The firm was started by two Weis brothers, Harry and Sigmund, who were later followed by their sons, cousins Robert and Sigfried and now by Bob's son, Jonathon. Its stock was listed on the New York Stock Exchange in 1965 and still is to this day.

Harrisburg residents were used to buying their food at small neighborhood stores that cut meats to order, had canned goods behind the counter and often provided credit for their customers. These stores relied on a  supplier  firm  to  replace the goods that had been sold. Two relatives named Lehrman were competitors in supplying these stores. Each had its own named canned goods that customers asked for.

One vendor named Jack Lehrman decided that supermarkets were the next step, but to avoid competing with his Harrisburg customers, he opened a chain with a Lancaster butcher in Washington, D.C. and named it Giant. The other vendor, Ben Lehrman, invited his son-in-law Alex Grass to join the firm.

Alex liked the idea of small stores that hung small packages of things people needed on racks (for example, a dozen nails).

Again to avoid competing with grocery clients, these were opened in locales far from Harrisburg, such as Scranton in northeast Pennsylvania or by non-relations, such as Bill Brody, in Harrisburg. It was called Rack Rite. The next step was going the drug store route with large front of pharmacy areas. This became Rite Aid and became one of the three largest drugstore chains in the country.

Another Giant Foods was started as a butcher shop in Carlisle, PA by David Javitch, who lived in Harrisburg. The firm

expanded to 6 grocery stores by David's son, Lee, and son-in- law, Norman Lipsett.  This duo continued to grow the number of stores in Pennsylvania. Eventually the firm was sold to a Dutch company named Ahold. Ahold continued expansion by merger with major companies around the world, included many firms around Philadelphia, Washington, D.C., and Virginia.

Pictures of the original butcher shop including David Javitch can be seen on the 2nd floor of the Giant store on Linglestown Road in Harrisburg.

One of our most interesting Seder's took place in Johannesburg South Africa in 1998. We were attending a consulting actuaries meeting in Capetown and made arrangements with a friend from Chicago to be invited to a Seder at the home of a South African actuary who was president of his insurance company.

There were 30 people in the dining room and most of them asked questions of the adult son who was studying Torah in Capetown. Three hours of questions were finally over and dinner was served by four black servants who filled a 30-foot credenza with everything in food you could imagine. It turns out the host's 95-year-old mother had made all the food two days before the dinner we ate, and another dinner for the second Seder, which was set up in the living room. She then travelled to Australia to do the same for her other son and his two Seders.

But let’s go to why we wanted to use the Food Fair Haggadah. When we first used it we asked each person to sign the inside cover with his or her name and the date. In the two we used for this Seder, the first names were Wendy Samet 1980 (daughter  of Bob and Lois, our good friends) and Maurice Rapoport 1981   ( Gail's father).

You can see the Haggadahs were moved to Los Angeles and the Seders were held at Alan and Cathy Siegel's home. Their Seders totaled about 30 guests, included their friends, two Catholic couples who came every year, also Isaacman  cousins,  Bernstein relatives, and Cramer cousins. There were ages from one year to octogenarian, and Maddie the dog. Alan Siegel conducted the service and he found the Food Fair just too long for the crew he had. He found a 30-minute Haggadah, just the right length, and his wife Cathy pasted the photographs of  Food Fair front covers into the 30-minute version and everyone present added their signatures and dates to the existing signatures. For the year 2020, Gail and I added our signatures to the original two copies, bringing the years, 1980 to 2020, to 41 years.

We enjoyed using the full English-Hebrew version, sang the songs, opened the door for Elijah and ate the afikoman.

It was a delightful evening and brought back wonderful memories of the persons who had joined us, some deceased, some living elsewhere, and some still close friends.  We hope you enjoyed this year’s Seder and found some of the history of Jewish people operating grocery businesses in Central Pennsylvania of interest. I apologize if there were any errors.